Is time up, for Manchester United’s midfield Armenian?

After a rip roaring start to the season, Henrikh Mkhitaryan’s form has grinded to a halt. A poor start and a lack of consistent performances, has left United’s number 22 struggling to regain his place. With only one substitute appearance in United’s last 8 games and rumours circulating of a possible move for soon to be out of contract Mesut Ozil, will United’s midfield Armenian be shown the exit?

The former Dortmund attacker began the season in fine fettle. His ability to link play between midfield and attack, was seemingly the missing piece of the Jose jigsaw. United went onto score ten goals in the first three games, with Mkhitaryan assisting 5.

Another impressive characteristic of the Armenian’s displays, was his partnership with Manchester United record signing, Paul Pogba. The frenchman’s ability to drive from the heart of midfield and draw the opposition into tackles, allows space his team mates further up the pitch. Mkhitaryan took full advantage of this by drifting into space, almost playing off the runs of Pogba.

No Pogba, no party

12/09/17 – Manchester United began their European campaign at home to the Swiss champions, FC Basel. The supporters were filled with delight, as they applauded the emergence of their match day captain, Paul Pogba. Delight soon turned to anxiety, as Pogba left the field clutching his hamstring after just 19 minutes.

Mourinho’s initial attacking philosophy, was one that enhanced the attributes of his creative attacking talent. It allowed Pogba to burst forward, whilst giving Mkhitaryan the ability to drift in search of space. Without either of these players, the structure of United’s attacks becomes ineffective and easy to predict.

Pogba’s strength whilst in possession, provides his fellow attackers with a platform to build from. Without the 24 year old, the system implemented by Mourinho becomes fragmented. The void created by Pogba is now filled, the pass delivered to Mkhitaryan is instead recycled.

Sometimes, it is difficult to see the effect one player may have on another – but in this case, the impact the French international had on Mourinho’s elected number 10, is frightening.

Mkhitaryan was heavily involved in United’s opening fixtures, acting as a creator as well as aiding the transition between midfield and attack. After 4 Premier League games, the three time UPL winner had the most touches as well as completing the most passes of any United attacker. However, the injury to Pogba saw the diminutive midfielder’s influence as well as United’s form, begin to suffer.

Without a designated playmaker in the heart of midfield, Jose seemingly preferred to structure attacks through the use of his full backs – using his central midfielders merely as recyclers of possession. This meant that rather than being the focal point in terms of creativity, he became a peripheral point of attack. In his 6 league starts after Pogba’s injury, Mkhitaryan had an average of 49 touches per game, compared with 71 when Pogba was present.

With less support from central midfield, opposition players saw an opportunity to apply pressure to the former Shakhtar playmaker. Previously, he would take advantage of the gaps left by defenders, but began to struggle when that space was no longer present. A combination of unsuccessful touches (often as a result of applied pressure) as well as a propensity to dribble past his opponent, saw Armenia’s captain begin to frustrate the Old Trafford faithful, as well as his manager.

The areas of the pitch that the attacking midfielder would take up began to vary, as he attempted to discover his new role within Mourinho’s system. Previously, viewers would see him in close proximity of the central midfielders, almost playing as a roaming playmaker. This allowed the attacker to receive possession facing the opposition goal, and use his devastating pace whilst  carrying the ball. 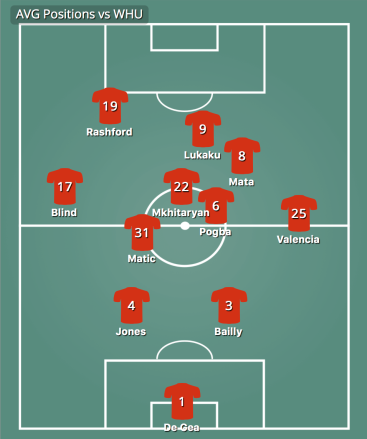 After the Basel fixture, his search for gaps between the opponents defensive shape caused a variation in his positional averages. The polyglot began take up a more prominent forward position, almost playing off the striker.

The switch of position aligns itself with Mourinho’s change of approach, as it provides an extra body for the opposition defence to mark – possibly allowing more space for other forwards in the process.

However a constant fluctuation of this position, further emphasised Mkhitaryan’s need to be involved. His continued movement around the forward positions – including a perplexing display versus Liverpool – caused an instability in his performances. Not only did it begin to seem like he didn’t know where he should be playing, it became obvious his lack of involvement saw him bereft of confidence, once he did receive it. 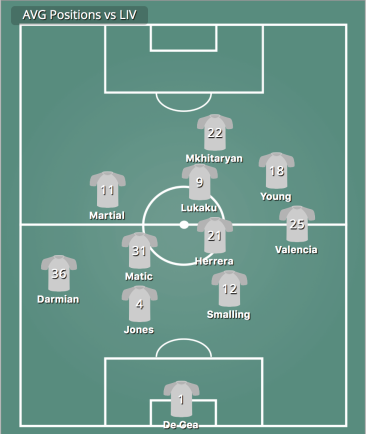 “If a player is not happy and brings with the request, a number we consider good for us, I would never say no. That is my approach as a manager. Every player has a price.” – Jose Mourinho discussing the transfer speculation surrounding Mkhitaryan

The BBC have reported that the United hierarchy have informed Jose, that he must trim down the squad if he wishes to buy in January – with the current wage bill at Old Trafford rising 13.5% over the last year. This, coupled with the current discontent between player and manager, may see the United boss attempt to sell the attacker sooner rather than later.

With the rumour mill beginning to turn over potential replacements, Arsenal’s Mesut Ozil seems to be top of that list. The German finds himself in a stalemate with the North London club, after turning down the most recent contract offer. Reports claim the gunners number 11 is requesting £300,000 a week to stay at the club, with Arsene Wenger refusing to meet such high demands.

Too early to eject?

The problems of this United side, go deeper than the manager’s choice of attacking midfielder. United have won just 6 of the 10 league games that Pogba has missed this season, showing the lack of quality alternatives in central areas. Despite Mourinho focusing on his the number 10 role, it appears the dearth of options beyond Pogba may be the more pressing issue.

It is almost farcical to improve the quality in a position with many alternatives, instead of looking to add much needed recruitment slightly further back. However, with Ozil’s arrival looking more likely by the day, it seems that problems in other departments may continue to go unnoticed.

Judging by his recent match day squads, it seems Mourinho’s mind may already be made up. Though Mkhitaryan has failed to find a level of consistency that would elevate himself into the European elite, the final judgement gleaned by his manager seems premature.

Thinking about sharing your articles?